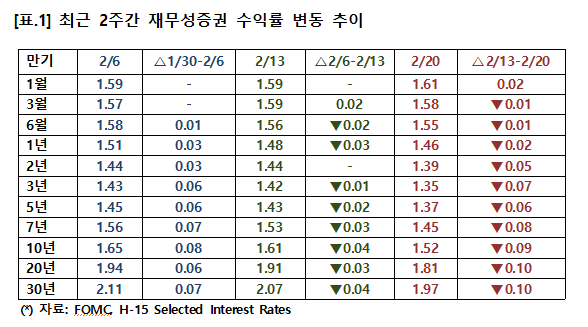 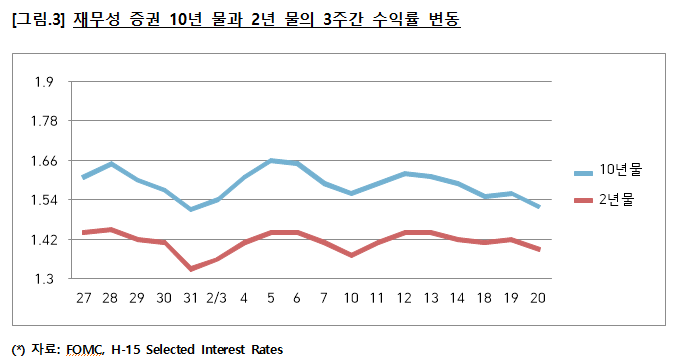 - The SOMA(아래<3> 참조) manager reviewed developments in financial markets over the intermeeting period.
For most of the period, risk asset prices rose as market participants focused on a perceived reduction in downside risks to the economic outlook, favorable data on foreign economic activity, and expectations of continued monetary policy accommodation in the United States and other major economies.

Some market participants suggested that the Federal Reserve’s actions in the fourth quarter to maintain ample reserve levels might have contributed to some degree to the rise in equity and other risk asset prices.

Over the final few days of the intermeeting period, financial markets responded to news of the spread of the coronavirus that started in China, which reportedly contributed to downward moves in Treasury yields and, to a lesser extent, U.S. equity prices.
On balance, U.S. financial conditions became more accommodative over the intermeeting period, with equity prices rising notably.

- Despite signs of reduced risks to the outlook and of some stabilization in economic activity abroad, financial market participants’ views on the likely course of U.S. monetary policy appeared to have changed little over the intermeeting period.
Market-based indicators continued to point to expectations that the target  range for the federal funds rate will be lowered by roughly 30 basis points this year. This was consistent with responses to the Open Market Desk’s survey, which continued to indicate that, while market participants viewed no change this year in the target range as the most likely outcome, they placed a higher probability on a reduction in the target range over the year than on an increase. Market commentary attributed the stability in federal funds rate
expectations despite the perceived reduction in downside risks partly to the Committee’s communications; some market participants reportedly regarded those communications as signaling a relatively high bar for changes to the target range. In addition, results from the Federal Open Market Committee Desk’s surveys suggested that, notwithstanding the abatement in some risks over recent months, many market participants continued to see risks to the economic outlook as skewed to the downside.

-The manager turned next to a review of money market developments and Desk operations. The federal funds rate was stable over the year-end date and remained close to the interest on excess reserves (IOER) rate. Ongoing reserve management purchases of Treasury bills and the Desk’s repurchase agreement (repo) operations kept aggregate reserves above the level that prevailed in early September, contributing to relatively calm money market conditions around year-end. Market participants cited funding from the additional longer-term repo operations spanning year-end and increased capacity in daily operations as helping to maintain stable conditions in short-term funding markets. In addition, market participants prepared earlier than usual for year-end, with borrowers increasing their term borrowing from private lenders and lenders apparently expanding their lending capacity.

-Since year-end, money market rates remained stable, with the Desk’s  longer-term repos maturing with no discernible effect on market conditions  and reserve management purchases of Treasury bills proceeding smoothly. At the current pace of $60 billion per month, the staff’s estimates suggested that   after April of this year, the Desk’s reserve management purchases will restore the permanent base of reserves to levels above those prevailing in early September 2019. Although reserves are projected to be above $1.5 trillion before April, a surge in the Treasury General Account balance during the April tax season is expected to briefly reduce reserve levels and, in the absence of repo operations, bring reserves down temporarily to around $1.5 trillion.

-The manager discussed a potential plan for gradually transitioning to an operational approach designed to maintain ample reserve levels without the active use of repo operations to supply reserves. Under this plan, repo operations would be maintained at least through April to ensure ample reserve conditions.

However, the Desk would continue the gradual reduction and consolidation of its repo offerings ahead of April, with the plan of phasing out term repo operations after April. As part of this transition, the minimum bid rate on repo operations could be gradually lifted, and the Committee could consider whether there is a role for repo operations in the implementation framework.

-In the second quarter, the manager expected reserve conditions to support slowing the pace of Treasury bill purchases, with the goal of eventually aligning growth of the Federal Reserve’s Treasury holdings with trend growth in its liabilities. As that time approaches, the Committee might wish to consider the appropriate maturity composition of reserve management purchases of  Treasury securities. The manager noted that, although the pace of Treasury purchases would likely continue into the second quarter, the rate of expansion in the Federal Reserve’s balance sheet would moderate during the first half of 2020 as repo outstanding was gradually reduced. The manager’s briefing addressed the possibility of a small technical adjustment to the Federal Reserve’s administered rates in light of the stability in money market conditions over recent months. With this adjustment, the Board would lift the interest rates on required and excess reserves by 5 basis points, and the FOMC would   implement an equal-sized upward adjustment to the overnight reverse repurchase agreement offer rate. This technical adjustment would reverse the small downward adjustment to administered rates made in September, when money markets were volatile.

■ The System Open Market Account consists of the Federal Reserve's domestic and foreign portfolios, in addition to reciprocal currency arrangements made with foreign official institutions.

- The SOMA domestic portfolio involves U.S. Treasury and Federal Agency securities held on both an outright and a temporary basis. The SOMA foreign currency portfolio is made up of investments denominated in euros and yen.

- The Federal Open Market Committee (FOMC) has designated the Federal Reserve Bank of New York to execute open market transactions on behalf of the entire Federal Reserve System. The resulting investments are held in the SOMA portfolio.

- In addition, while the Treasury, in consultation with the Federal Reserve System, has responsibility for setting U.S. exchange rate policy, the New York Fed is responsible for executing foreign exchange intervention.

- The U.S. monetary authorities -the Treasury Fed- may intervene in the foreign exchange market to counter disorderly market conditions, using   funds that belong to the Federal Reserve and to the Exchange Stabilization Fund of the Treasury Department.

Traditional open market operations - the buying and selling of securities in the marketplace - are one of the basic tools the Federal Reserve uses to conduct monetary policy, that is, influencing the cost and availability of money and credit in the U.S. economy.

The Federal Reserve Act and the Monetary Control Act of 1980 provide the Fed with the authority to exchange maturing securities and to buy and sell obligations of the U.S. government in the open market.

A specified portion of the System's holdings is allocated to each of the 12 Reserve Banks. The percentage allotments of the portfolio are adjusted annually to reflect movements of deposits among Reserve Banks.

The composition and value of the portfolio change as a result of the Fed's open market operations. Expansion is achieved by outright purchases, mostly in the secondary market from primary dealers, supplemented by some purchases from foreign central banks and other international institutions that hold accounts with the Federal Reserve. Contraction is achieved by redeeming securities at maturity or outright sales. At the end of 2008, the par value of domestic portfolio holdings was $576 billion.

The U.S. monetary authorities invest their foreign currency balances in a variety of instruments that yield market-related rates of return and have a high degree of liquidity and credit quality.

To the greatest extent practical, the investments are split evenly between the System Open Market Account and the Exchange Stabilization Fund. A significant portion of the U.S. monetary authorities’ foreign exchange reservesis invested in European and Japanese government securities. On an outright basis, the U.S. monetary authorities hold German, French, and Japanese government securities.

-The interest received by the Federal Reserve on its portfolio holdings constitutes a large portion of the System's income. Unlike individuals or private institutions, however, the Fed acquires and sells securities purely to implement monetary policy and not for profit. The interest earned on those holdings is apportioned to the individual Federal Reserve Banks according to the percentage of the portfolio each owns. A portion of the earnings is used for salaries and other operation expenses of the Banks, with a small amount set aside in a surplus account. The remaining income is paid to the U.S. Treasury.

The SOMA portfolio is managed on a daily basis. The manager is appointed by the FOMC and customarily is a senior officer of the New York Fed. The account manager attends the FOMC meetings to report on domestic operations, as well as to be fully informed of the discussions leading to the adoption of the committee's monetary policy directive to the New York Fed.​ 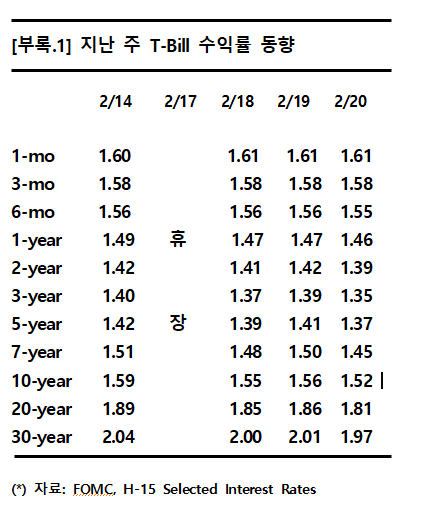